There’s no particular reason to post another posh bod in the wake of Felix Hanbury-Tracy.  If my singlng out of Roundell is influenced by anything it’s that he has links to a well-known building and to groups that carry on in Petersham today.

2nd Lieutenant Victor Roundell George Biddulph was born in London on 24 May 1897 (sharing a birthday with the reigning monarch, Queen Victoria and with Field Marshal Jan Christiaan Smuts).  He saw active service with The Rifle Brigade,  and was killed in action, near Flers, on 15 September 1916, aged 19. His promotion to 2nd Lieutenant was gazetted just three days later.

Roundell is commemorated on the Thiepval Memorial.  According to his Medal Card, Roundell served with the 5th Battalion, a Reserve Battalion, but, at the time of his death, was attached to the 8th Battalion. 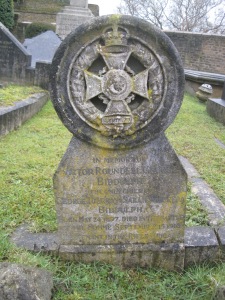 WhileVictor has no known grave, he does have a gravestone at the foot of his mother’s grave, close to the Memorial in the Churchyard of St Peter’s.

Roundell’s father, George Tournay Biddulph was a banker, like his father before him.  The ‘family’ bank, Cocks & Biddulph, founded in 1757, was based at 43 Charing Cross from 1759.

The Biddulphs were a prominent Ledbury family whose motto was Sublimiora petamus (‘Let us seek higher things’). Roundell’s birth, coming after more than a decade of marriage, is likely to have delighted his parents, who were second cousins.

When I first noticed the shared birthday, I did not realise that he had actually been named Victor after Queen Victoria, apparently at her express desire.  The ‘Roundell‘ in Victor’s name is after his maternal grandfather, Roundell Palmer, Lord Chancellor and 1st Earl of Selborne.  The five page entry for Roundell Palmer can be viewed in the online Oxford Dictionary of National Biography (“the Oxford DNB”).  If you don’t have a subscription, you may be able to view the Oxford DNB through your branch library’s online reference services. I have learnt from the history of the Petersham Troop of Baden-Powell Scouts that he was known to his friends as ‘Roundell’.  I assume that the George in his name is a nod to his father.

Roundell’s parents were enthusiastic supports of the Scouting Movement.  His  mother, The Lady Sarah Wilfreda Biddulph died in October 1910, just a few days before a regional Scouting rally in the grounds of Douglas House.  Roundell was just 13.

The March 1941 issue of The Petersham Leaflet looks back to October 1910 in which George Biddulph, then Scoutmaster of the Petersham Troop “suffered the loss of his wife, Lady Wilfreda Biddulph, a lady who in the short existence of the Scout Movement, had shown great interest and sympathy.  Her loss was deeply felt by all.”

Lady Wilfreda had died on Sunday, the 4th: the report goes on to describe the rally (“the first [Scout] Association Rally”) in the Douglas House Meadows on Saturday the 11th “at which troops from Kingston, Surbiton, Claygate, The Dittons, Hook and Chiswick were present.”  The writer notes that early in 1911, Mr Biddulph “took a trip to Egypt and was away for about three months, during which time Mr Urquhart had joined as A.S.M” (Assistant Scout Master).

By the night of the 1911 Census, father and son were both back at Douglas House, with a footman, a housekeeper, two house maids and a kitchen maid in attendance.

In The Petersham Leaflet‘s June 1941 issue, continuing his history of Scouting in Petersham, the writer comments on the non-denominational nature of the Petersham Scout Troop.  He notes that “At one time there were among its members Jews, Roman Catholics, Nonconformists, Church of England boys and three sons of a gentleman of the Mohammedan faith.  But all worked well together.”

Roundell’s father, George, survived his only child’s death by 13 years, living on until July 1929, though in frail health.  The Short History of the Petersham Troop of Baden-Powell  Scouts, notes that Walter C. Joel took over as Scoutmaster from George Biddulph in 1921, when George gave it up because of ill health.  Walter Charles Joel was the father of Captain Harold Walter Joel, another of the men commemorated on the Petersham War Memorial.  There’ll be more about this in my post on Harold Joel.

Still to come:  Roundell was in 5/Rifle Brigade but attached to 8/Rifle Brigade. I’ve been reading them, hoping to put together a picture of the action on the day Roundell was killed.  I’d also like to find out more about Roundell’s education.

Note regarding 43 Charing Cross Road: George Biddulph used that address when he supported the award of a commission to Eric Howard; Harold Joel accepted a position at the Biddulph’s “Banking House” in January 1915, while he ‘marked time’ until his eighteenth birthday.

Margaret Frood is a Family and Local Historian with an insatiable curiosity about the partially told stories of a family's past. Her four war memorial blogs have been created in the hope that they will help to rescue from oblivion the stories of those listed on the war memorials of Petersham, Ham and Tur Langton, as well as Southern Africans commemorated in the UK and in Western Europe.
View all posts by Margaret Frood →
This entry was posted in Uncategorized and tagged Deutsche Schule London, Douglas House, George Tournay Biddulph, Ham & Petersham Rifle Club, Harold Walter Joel, Lady Sudeley, Petersham, Petersham & Ham Scouts, Queen Victoria, Rifle Brigade, Scouting Association, Sublimiora petamus, Victor Biddulph, WIlfreda Biddulph. Bookmark the permalink.